"The most successful founders are annoyingly detail-oriented, they don't take no for an answer." 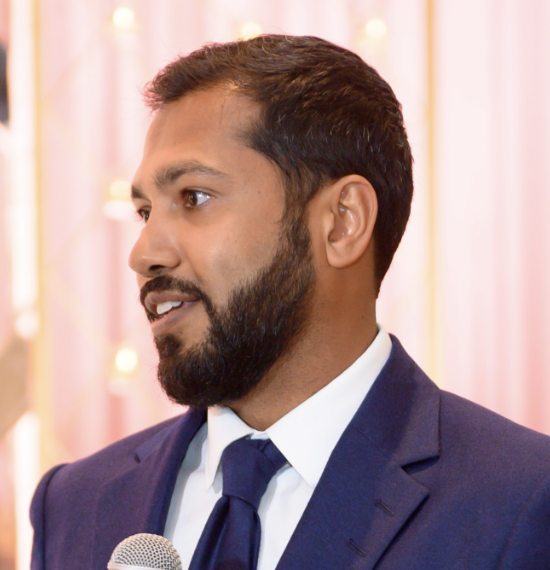 A programmer since Grade 6, Tehsin built Burundi’s first high-speed ISP in 2000 - a time when Central Africa was first logging onto the Internet. Then, after another 10 years as a software engineer, Tehsin founded Serind Labs in 2013, AirMason in 2017 and serves as CEO, scaling up both businesses.

At Serind, he has taken several napkin ideas and helped founders turn them into scalable businesses. While AirMason is a HR startup with best in breed clients such as Mattel, P&G, Elastic Search, Soho House, NPR, and Softbank, helping them with their employee handbooks.

In today’s episode, Melissa sits down for a (virtual) drink with Tehsin Bhayani, Founder and CEO of AirMason. After Tehsin pours his lager and Melissa her ginger beer, Tehsin introduces himself as the founder of two tech companies. The first, Serind Labs, is a digital agency specializing in designing and building products for other startups. The second is AirMason, an HR SaaS startup which sells to large enterprises. From her own experience starting three different startups, Melissa shares, she has learned that years of R&D have to come before launching a product. Teshin adds that a minimum viable product (MVP) has to be viable in the sense that customers will pay for it.

Once Serind was bringing in a good amount of cash flow, they began to experience the highs and lows of the agency business. Thus, Teshin knew he wanted to begin a new project and was led to founding AirMason. Next, Teshin shares how he was able to leverage his vast experience working with other founders at Serind when he came to evaluate the AirMason opportunity. If he had founded a startup 9 years back when he really wanted to, he believes he would have failed due to his lack of experience. Having the opportunity to work alongside hundreds of founders (including Melissa) gave him front row experience of what it really takes to run your own company. He noticed that each of them shared a common attention to detail and precision on their operations.

Teshin honestly reveals that when he and his colleagues first acquired AirMason, they found the product so boring that they pushed it off to the side. Two years later, when they realized the service had become an integral part of a company’s culture and infrastructure, they finally put together a proper team to work on it in earnest. Then, he shares how companies can know if their product has found product market fit. AirMason is especially meant for new companies who have just begun hiring and want to create a set of policies and culture handbooks to clearly convey their values and mission. Though their core specialty was creating polished handbooks, today people use the service for all kinds of documents. Their main market strategy for advertisement was utilizing SEO, which proved to be very successful.

Because Serind had a lot of cash flow but was minimally profitable, AirMason had to be very forward-thinking and operate in small, bite-sized experiments. It was drilled into the employees that moving slowly is okay and sales was the one thing that could fix all of the problems that would inevitably rise. As they made small amounts of profit, they were able to start putting it towards new projects within AirMason. At Serind labs, Tehsin hired talent for very specific skill sets. At AirMason, however, he looked for talent that was well rounded and fully trusted them with every aspect of the business. He then trained them not to rely on him or even colleagues for their feedback when it came to decision making and execution. He believes it was okay for them to mess up as much as they wanted, as long as they felt comfortable enough to be their own manager. Then, Teshin shares about his decision to ultimately back away from Serind Labs for good once AirMason became profitable.

Before wrapping up, Tehsin highlights the things he believes he got right over the course of his career so far versus the mistakes he made along the way. On the agency side, this included making sure the processes were strong enough to flourish in his absence. On the product side, he learned the importance of working side by side with an expert rather than trying to do everything himself. When it came to making the wrong decision, this usually fell on his initial judgment when it came to hiring. Finally, he shares his best advice for founders who are looking to transition from a service business to a product business.

0:55 - Welcome to this episode, in which host Melissa interviews Tehsin Bhayani.
5:30 - Who is Tehsin and what does he do?
9:38 - Melissa and Teshin discuss their perspectives on the significance of MVP.
13:30 - How Tehsin’s experience working with other founders prepared him for becoming a Founder and CEO.
18:08 - The initial stages of Teshin’s acquisition of AirMason.
22:04 - What exactly does AirMason do?
29:38 - The go-to market strategy for AirMason.
38:00 - The progression of balancing revenue and cost on both sides.
41:38 - Explaining the dynamic of the AirMason team.
47:38 - The point when AirMason’s revenue began to break even.
50:44 - Tehsin highlights the things he got right vs. mistakes made along the way.
58:22 - Advice for founders looking to transition from a service business to a product business.

Welcome to the ProfitLed podcast, where we discover proven growth strategies for bootstrapped entrepreneurs from the people who have done it before to help you accelerate your business! The ProfitLed podcast is brought to you by eWebinar, the leading automated webinar tool, and hosted by eWebinar Cofounder and CEO, Melissa Kwan.

ProfitLed is forum for the unsung heroes of SaaS, the founders and others behind the bootstrapped startups who are creative and resourceful enough to forge a pathway to success. Here’s where they get to share everything they learned along the way, so you can benefit from their expertise and find success in your ventures, too!

Stay in touch with us

We’ll only send you things we think you’ll enjoy.